My debut novel, Stirring Up the Viscount, takes place in County Durham in northeast England. I lived in Durham for a year in the mid-80s, while I attended the University of Durham. I was struck by the city’s beauty and grit back then, and found it an inspiring setting for a romance all these (many, many) years later.

Durham has a fascinating history. It begins with the story of St. Cuthbert, a seventh century monk from Northumberland. He was for many years the bishop of Lindisfarne, an island off the coast of Northumberland, who traveled far and wide across northern England. When Cuthbert died in 687, he was entombed in the monastery on Lindisfarne. Some years later, the monks on the island inspected the coffin for some reason, and discovered that Cuthbert’s body was perfectly preserved, a miracle deemed worthy of sainthood. St. Cuthbert continued to lie undisturbed until Vikings threatened to raid Lindisfarne in 793.

The monks fled the island, along with holy relics and the coffin of St. Cuthbert. Legend has it that they carried it around for more than a century until they reached a spot to the east of what is now Durham. The saint’s coffin suddenly became too heavy to lift, and no amount of effort would budge it. After three days of prayers and fasting, the monks reported that a vision of St. Cuthbert appeared to them, instructing the faithful that Dun Holm (meaning “Hill Island”) should be his final resting place.

The monks had never heard of such a place, but now that they had their marching orders they were able to move the coffin again. The story goes that while they were searching, they overheard a milkmaid asking whether anyone had seen her dun cow, and was told the cow was last spotted at Dun Holm. Overjoyed, the monks followed the milkmaid until arriving at Dun Holm (I like to picture a very Monty Python-esque assembly chasing after a milkmaid through the forest), which was a peninsula set inside a tight bend of the River Wear.  Eventually known as Durham, the area was found to be an ideal resting place for St. Cuthbert, and the monks settled there. 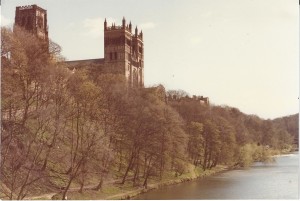 A wooden “White Church” was built in the center of the peninsula in 995, and replaced by a stone minster in 998. The present cathedral was constructed between 1093 and 1133. 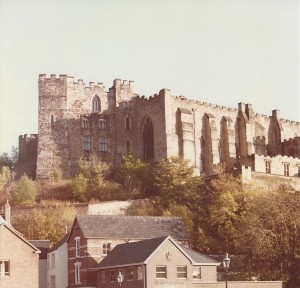 Construction began on Durham Castle in 1072. It housed the Bishop of Durham, and enabled defense of the area from invasion by the Scots.

Durham became one of England’s leading centers of scholarship during the medieval period, and three of the colleges which are now part of Oxford University—University, Balliol, and Trinity–had their origins in Durham. Although efforts were made to create a university in Durham as early as 1541, politics and North-South rivalries prevented it until 1832. Durham Castle housed the first of Durham University’s fourteen colleges, University College. Still in use today, the Castle is the oldest university building in the world. 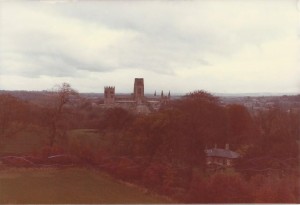 I had the titular Viscount in my novel, Jonathan Tenwick, attend the University of Durham. By the time he would have matriculated in the late 1850s, there were two more colleges, St. Hild & St. Bede and Hatfield. The paths that Lucien Ravensdale and the Earl of Longley would have walked continue to exist, and the train station still offers one of the most breathtaking views in England (although it’s kind of hard to tell from my really bad 1985 picture).

But it is there that the similarity between the real Durham and my fictional one ends. Although County Durham has been the seat of more than one nobleman and home to plenty of great houses, there is no Earl of Longley, no Longley Hall.  Nevertheless, I find that being able to picture a real place in my mind when I write makes it easier to describe the setting, and lets my imagination run wild with the possibility of what might have been.

And if you haven’t yet read about my fictional denizens of Durham, Stirring Up the Viscount is ON SALE for 99 cents at The Wild Rose Press through May 14. Also available from Amazon and Barnes & Noble.