One of the things I’ve encountered in British recipes–both old and new–is an entirely different vocabulary.  Spelling is also an issue: I just spent ten minutes looking for pudding molds in Mrs. Beeton before I remembered it’s spelled moulds in the UK. There are different terms for so many things in baking, and finding out what they mean takes a bit of effort.

In the US, modern baking recipes provide temperature in degrees Fahrenheit and measurements based on volume–a cup of flour, a tablespoon of butter.

British recipes provide temperature in either degrees Celsius or according to a gas mark. Older recipes use the terms gentle oven, moderate oven, or something similar. Ingredients are listed by weight–a pound of flour, 20 grams of butter.

I invested in a decent scale to help me with the weights, but a conversion chart for oven temperatures is essential in making these recipes. There’s a good one here, but basically, a slow oven is 275-300 degrees, a moderate oven 325-350, and a hot oven 425-450. I am still trying to figure out what a “gentle” oven is, but I’m going to assume it’s similar to “slow.” It remains to be seen whether I will burn the crap out of things with this theory–I’ll keep you posted.

This is a fantastic article, by the by, which talks about oven temperatures and how even though we have temperature  settings on ovens now, they don’t always mean what we think they do.

Mrs. Beeton notes the following about the mysterious spoonful measurements you can find in Victorian recipes:

A TABLE-SPOONFUL is frequently mentioned in a recipe, in the prescriptions of medical men, and also in medical, chemical, and gastronomical works. By it is generally meant and understood a measure or bulk equal to that which would be
produced by half an ounce of water.
A DESSERT-SPOONFUL is the half of a table-spoonful; that is to say, by it is meant a measure or bulk equal to a quarter of an ounce of water.
A TEA-SPOONFUL is equal in quantity to a drachm of water.
A DROP.—This is the name of a vague kind of measure, and is so called on account of the liquid being dropped from the mouth of a bottle. Its quantity, however, will vary, either from the consistency of the liquid or the size and shape of the mouth of the bottle. The College of Physicians determined the quantity of a drop to be one grain, 60 drops making one fluid drachm. Their drop, or sixtieth part of a fluid
drachm, is called a minim.

(A drachm is pronounced dram, and is about 1/8 of a fluid ounce.)

Another curiosity is the various names for standard ingredients. In the U.S. we have all-purpose flour, cake flour, whole wheat flour, and bread flour, among others. British recipes call for strong flour, hard flour, self-raising flour, soft flour, and plain flour. Essentially, plain flour is roughly the same as cake or soft flour (although there are some who say it’s equivalent to our all-purpose flour). Hard or strong flour is equivalent to bread flour. Self-raising flour is roughly the same as our self-rising flour, which is all-purpose flour to which baking powder and salt have been added. I have heard, however, that UK self-raising flour doesn’t have salt in it, so it might be better to make your own. Google “self-rising flour substitute” and you’ll find plenty of options. This is a great discussion of flour equivalents between the US and the UK.

Sugar is also different. In addition to granulated sugar, which is the same on both sides of the pond, UK baking recipes use caster sugar and icing sugar. Our US equivalents are superfine sugar and powdered sugar.

Below is a nice conversion chart for some of these items, which I found at http://www.sweet2eatbaking.com/. She has some other conversion charts and some fun recipes too. 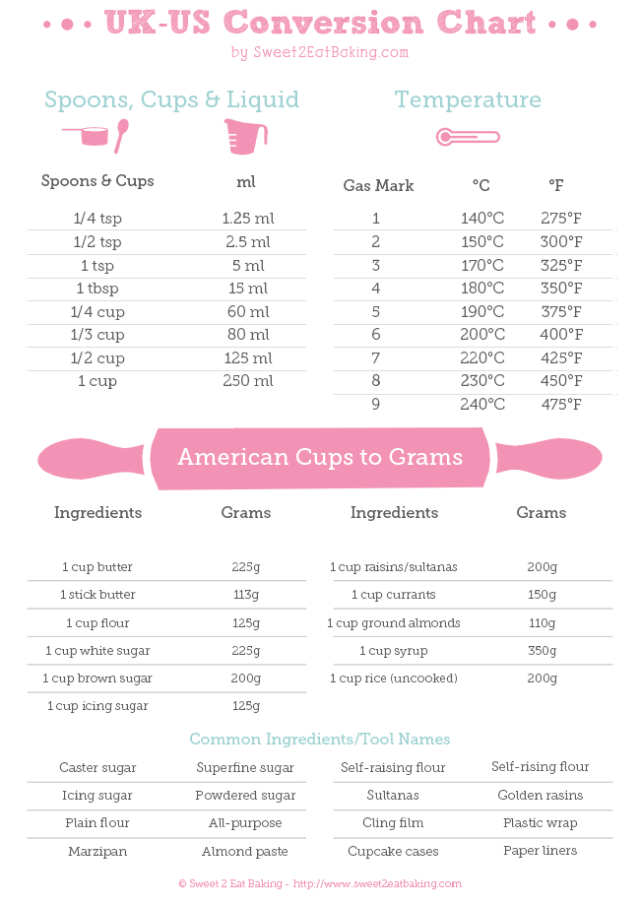