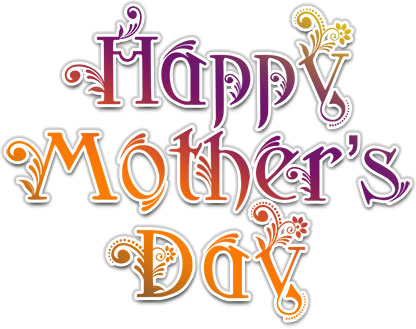 ‘Tis Mother’s Day in the U.S., the day we celebrate Mothers and all they do for their children. In my household, I have only one rule for Mother’s Day: I do not have to cook a single meal ALL DAY. This generally means that we go out for every meal, but whatever. I am greatly looking forward to this, as I am extraordinarily tired of my own cooking, and even more tired of having to decide what to cook.

This year on the blog, I thought I would head back to the Victorian era for thoughts on motherhood. Queen Victoria, of course, set quite the example–the “Grandmother of Europe,” she was the model of marital harmony, utterly devoted to her husband, even after he died, and their nine children. Women during the Victorian period were expected to marry, bear children, and provide domestic stability to their families. Periodicals and books of the day–Mrs. Beeton’s Book of Household Management, The Englishwoman’s Domestic Magazine, Cassell’s Household Guide, and many, many others–all emphasized that the role of women was to be exclusively with the realm of the household, and provided many hints for domestic success. 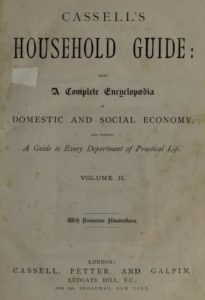 Cassell’s Household Guide: Being a Complete Encyclopaedia of Domestic and Social Economy and Forming A Guide to Every Department of Practical Life was published initially in 1869. Running into several volumes, it offered advice on such diverse topics as household chemistry, raising animals for profit (“Pigs”) and for pleasure (“The Silkworm”), how to make fans, ornamental soap (“We believe that most people are aware that scented soap is bad for the skin…”), cooking, the manufacturing of artificial manure (who knew?), the mechanics of chimneys and gas meters (complete with mechanical drawings), and, of course, how to rear one’s children.

So in honor of Mother’s Day, I thought I would share with you some tips from Cassell’s. The more things change…

“When a woman is about to become a mother, she ought to remember that another life of health or delicacy is dependent upon the care she can take of herself; that all she does will inevitably affect her child, and that mentally as well as physically. We know that it is utterly impossible for the wife of the labouring man to give up work, and, what is called, “take care of herself;” as others can. Nor is it necessary. The “back is made for its burthen.” It would be just as injurious for the labourer’s wife to give up her daily work and exercise, as for the lady to take to sweeping her own carpets or cooking the dinner. Habit becomes second nature.”

“A nursing mother should live well. She may take a glass of porter or ale at dinner.”

“The aspect of a day-nursery should be light, airy, and, if attainable, exposed to the south. It is impossible to over-estimate the worth of this situation in the attempt to rear children in full health and buoyancy of spirit.”

“In more advanced childhood than we have hitherto spoken of, the importance of sleep is undiminished, and should be observed with regularity. No invariable rule can be laid down for general observance, but most children between the ages of four and seven years require, at least, twelve hours’ sleep. Ten hours are supposed to be needful for schoolboys, and eight for adults. Few children under ten years of age can be kept out of their beds after seven o’clock without injury to their health. When once awake in the morning, they should be accustomed to rise without delay.”

“The best dress for the crawling age is one in which little French children are usually attired – a sort of knickerbocker suit, warm and loose, with trousers and vest all in one piece. The over-all pinafore, so much in favour in our nurseries, is a capital contrivance for keeping the under-garments clean, but sadly impedes the free movement of the limbs, by being apt to get twisted round the child’s legs, and it should always be taken off when they crawl.”

“There is not a single duty which a mother discharges towards her babe which may not be rendered the medium of conveying the highest principles of morality.”

“A contrary course of conduct is unfortunately liable to be pursued by parents, who, either from excessive fondness, impatience, or want of intelligence, habitually give their little ones all they ask for. No more effectual mode of spoiling a child can be pursued than by so doing. By thus inverting the order of things, and making themselves instead of their rulers, slaves to their children, they create a double misery — neither themselves nor the children are happy.”

“The law relating to the vaccination of infants is imperative in its tone, and commands the parent (or other person having the care, nurture, or custody) of every child born in England or Wales, to procure, within three months after the birth, the vaccination of the child by the medical officer or practitioner appointed for the purpose—”

“The habit of giving children much bread and butter, to the exclusion of other substances, is an error liable to be contracted from the facility of providing the meal. The practice is to be condemned, not only on the score of deficiency of nourishment, but on that of economic value. The butter sold in towns is seldom what it professes to be, and is liable to be composed of inferior fats artfully disguised.”

“The highest test of maternal love is the judicious blending of approval or reproof, according as it is right or wrong to gratify a child’s fancies. That description of love which consists in anticipating every wish and humouring every whim, is but the shadow of affection. The time comes when baby-passions are no longer to be quelled by bribes of sweetmeats and toys; and a bond of love which has been formed mainly on so insecure a foundation is ready to be broken at the first sign of opposition.”

“So important, from every point of view, is the habit of speaking the truth, that too much effort cannot possibly be made to render truthfulness a part of a child’s nature, whilst the mind is yet plastic enough to receive true impressions, and the conscience still sensitive to tender rebuke.”

For more maternal advice from Victoria’s time, check out these sources, and Happy Mother’s Day!