We recently added a puppy to our household. Sneaky Pete is a standard poodle of indeterminate age. He might be nine months, he might be 18 months; he was a rescue, so who knows?  He and our other dog, Larry, also a poodle but getting on in years, play wonderfully well together. Larry is thoughtfully teaching Pete to bark.

I adore dogs (I like cats too, but they make me wheeze) and without really thinking about it feature at least one in my WIP, whatever it is. So because my life is currently invaded by dogs–at this very moment they are wrestling next to my chair–I thought I’d dedicate this post to historical canine companions.

Dogs have always been companions to  aristocrats, from the lady’s lap dog . . .

pet dogs were considered a sign of status and wealth.

The British Royal Family has been portrayed with dogs in portraits since the 17th century, from the King Charles Spaniel, to Queen Victoria’s border collie, to Queen Elizabeth II’s corgis. Check out this post for some photos of royal pets.

Our dearly departed George, Pete’s predecessor, was a representative of an ancient and aristocratic breed. In him you could easily see how Dalmatians were bred to run alongside carriages, and to guard them when they stopped to rest. In his younger days George could run for long distances without tiring (this was particularly problematic when he escaped the back yard), and I have never seen a more dedicated protector of his people. The exact origin of the breed is disputed, but according to various sources spotted dogs resembling the Dalmatian were found depicted in Egyptian tomb paintings. A Dalmatian was depicted in a painting alongside the Dauphin of France, and the breed was “greatly prized in Georgian times as a living ornament and coaching accessory.”

In addition to serving as pets and “ornaments,” dogs were used for sport. Foxhounds, especially, were bred in Europe to hunt foxes.  The English foxhound was scientifically bred by members of the English aristocracy. Other “sporting” dogs included greyhounds, bulldogs, and mastiffs; the latter two were bred for fighting.

Dogs were also used in other ways for hunting: English pointers, poodles, and spaniels were bred to retrieve fallen game after shooting. Poodles ultimately left their usefulness behind and became companions to the royal houses of France.

I could keep going, but I won’t. You can find marvelous posts on dogs in history online –check out http://thedustyvictorian.blogspot.com/2011/04/victorian-dogs.html, http://sniffingthepast.wordpress.com, http://www.nytimes.com/books/first/s/schwartz-dog.html,  http://www.npr.org/2011/11/08/142100653/how-dogs-evolved-into-our-best-friends, and many, many more.

Here’s to our best friends. 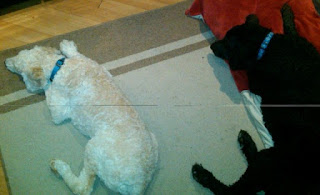