Two weeks ago my family and I wandered westward for a family reunion and to visit some of my husband’s childhood haunts. On the way there my husband suddenly turned off the road into the DeSoto National Wildlife Refuge. Turns out he spent many happy hours exploring there when he was a kid, and when he saw the entrance he impulsively decided to stop to see how it had changed in the last 40 years.

It was a fortuitous detour, at least for this history geek, because on the land owned by the Refuge, the wreck of a steamboat rested in the mud for 100 years. 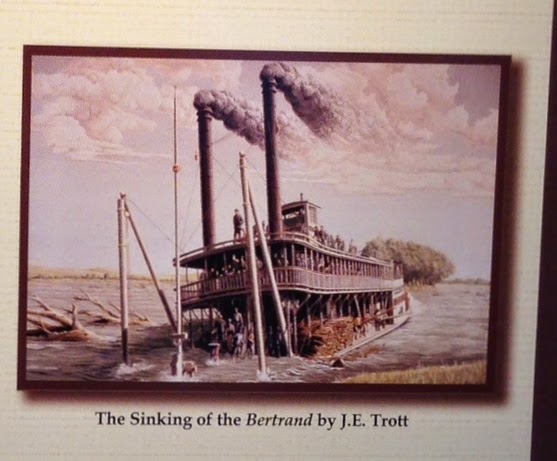 On March 18, 1865, the Steamboat Bertrand set off down (up?) the Missouri River from St. Louis, Missouri for the newly discovered gold fields in Fort Benton, Montana Territory. It carried 250,000 pounds of cargo as well as many passengers. 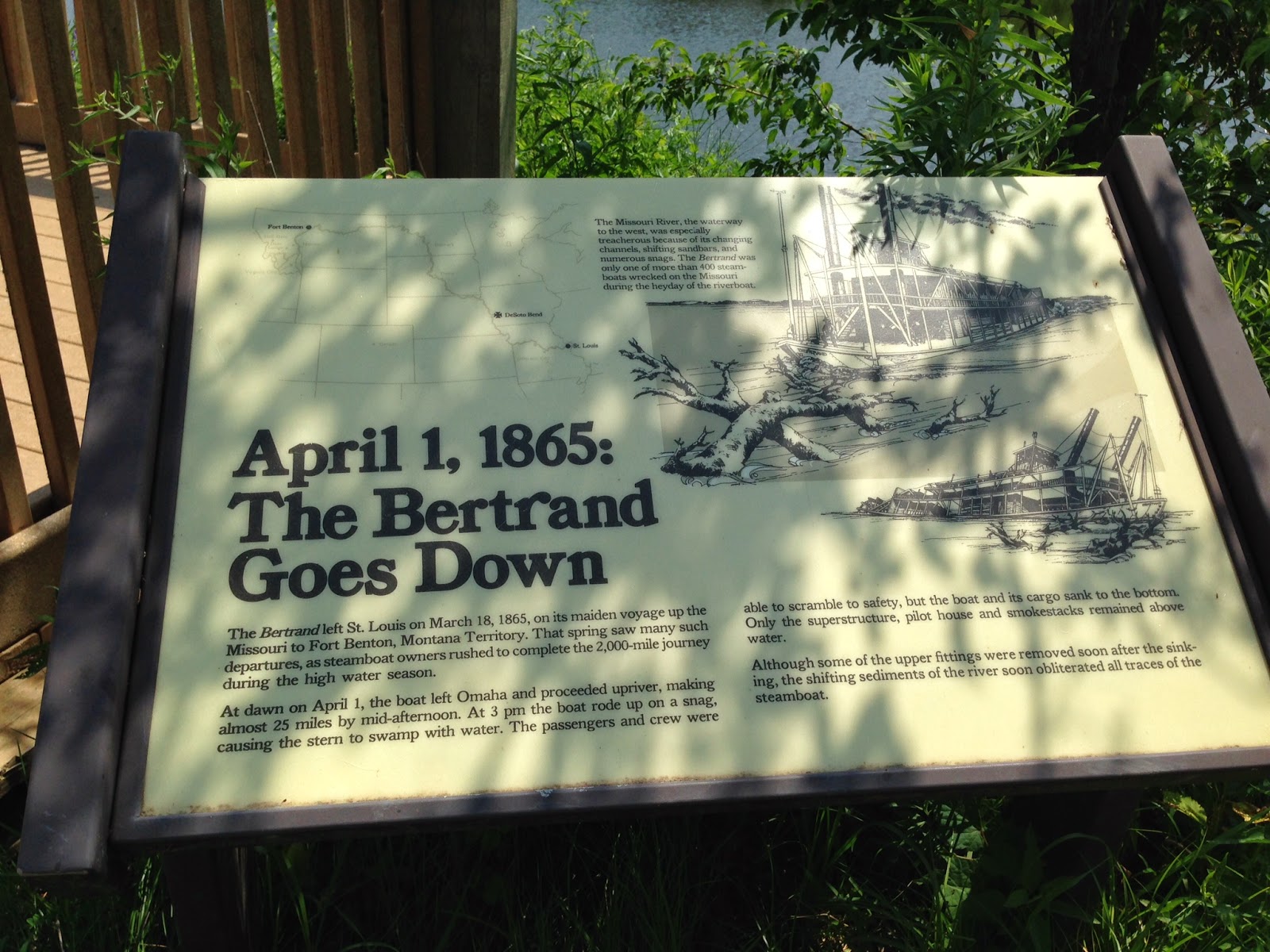 On April 1, 1865, the ship hit a submerged log on the treacherous Desoto Bend of the Missouri River, about 25 miles upstream from Omaha, Nebraska, ripping a hole in the ship’s hull bottom. It sank in 12 feet of water in under ten minutes. Although all the passengers were saved, almost all of its cargo was lost. The Bertrand joined over 400 boats that sank on the Missouri during the steamboat era. 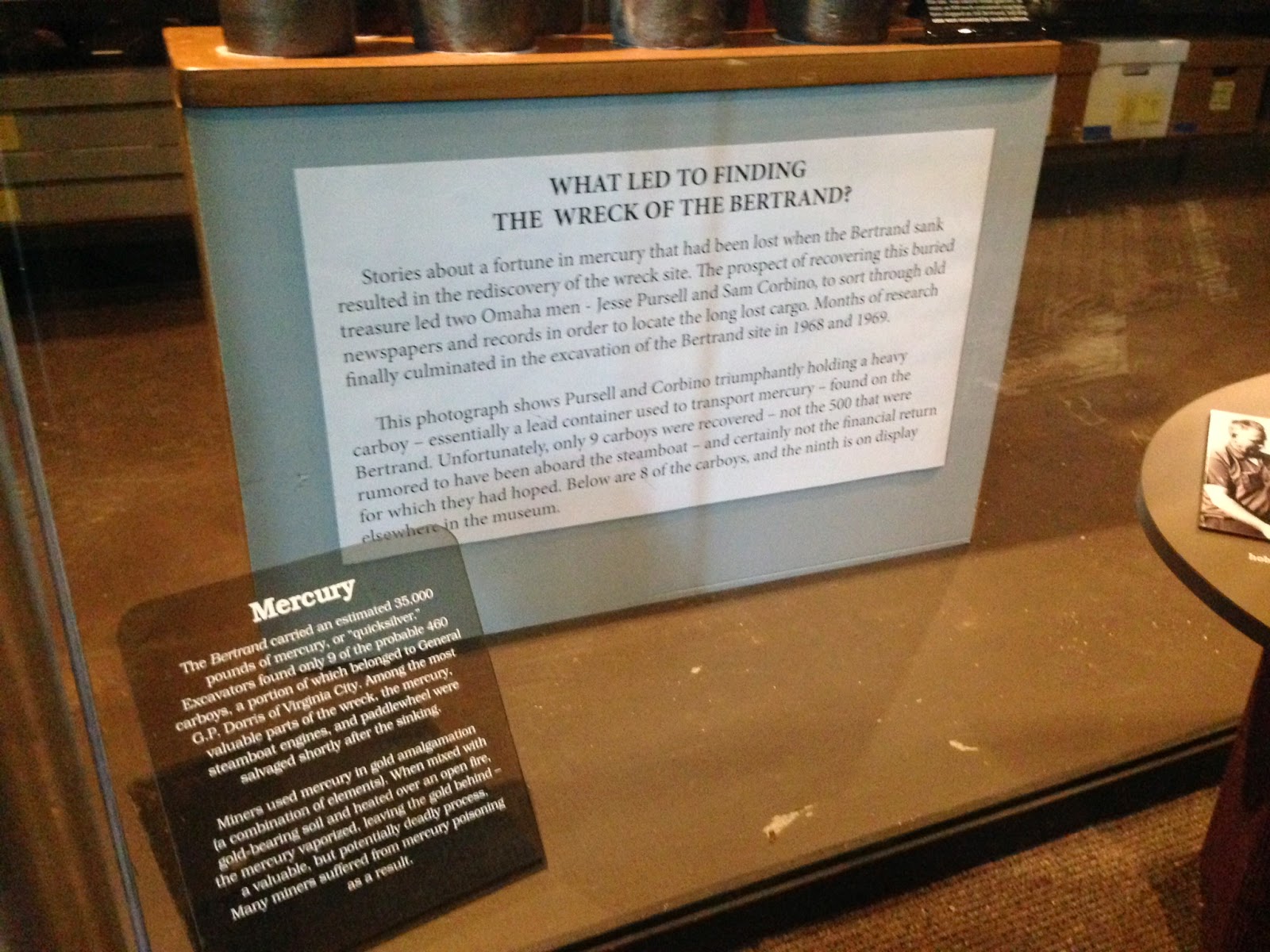 The ship sank into the mud and stayed there until 1967, when the search for the wreck began, spurred on in part by the fact that the Bertrand was reputed to be carrying 30,000 pounds of mercury, which was to be used in mining operations in Montana. The excavation was completed in 1969, and all artifacts were turned over to the Fish and Wildlife Service.

Most of the cargo was held in crates, barrels, and burlap sacks, which were almost immediately covered with thick clay, thus preserving it. When the wreck was discovered the cargo was in nearly the same pristine condition it had been when the vessel sank a century before. For a writer whose time period is the 1860s, it was a treasure trove indeed.

There is SO MUCH stuff they don’t have all of it on display, but there is enough to give you an excellent idea of what people wore, what kinds of things they used for cooking, working, playing, and relaxing. Some of my favorites are posted below. I apologize for the picture quality–all I had was my phone, and I had to be quick because the battery was dying. . .

There’s an interesting article, with photos from the excavation, at http://www.nebraskahistory.org/publish/publicat/history/full-text/NH1970Bertrand.pdf.
The Bertrand collection also has a Facebook page, at https://www.facebook.com/SteamboatBertrandMuseam, with way better photos than the ones I took, including pictures of items not on regular display.