In my first two novels, I burn down three buildings.

This has provided a source of amusement to my critique partners. At our last critique group meeting, suggestions for marketing swag included matches (emblazoned with a suitably catchy saying, such as Light a Fire with Marin McGinnis) and candles that smell like burning wood. Ha.

Anyway, as often happens, my critique partners’ ribbing inspired a blog post, so here we go.

Fire was a very common occurrence in past centuries–wooden houses, thatch roofs, and the use of other highly flammable materials in building all contributed to an increased risk of fire. The most famous English fire was, of course, the Great Fire of London, which started in a bakery in September 1666. It killed an  unknown number of people, and destroyed 13,200 houses, 87 parish churches, The Royal Exchange, Guildhall, and St. Paul’s Cathedral.

At the time, there was no such thing as a fire brigade–fires were extinguished by ordinary citizens (Samuel Pepys recorded in his diary that King Charles II was seen helping to put out the Great Fire) using leather buckets, axes, and “water squirts” (I have no idea what these are), with minimal success. The Great Fire was stopped only when the Navy blew up houses in its path, thus ensuring the fire could no longer spread.

In the wake of the fire, the first insurance companies were created. People paid an insurance company, just as they do today, to compensate them in the event of fire. Unlike today, however, each insurance company created its own fire brigade as a way to minimize damages, and thus its own costs.  Each company placed a firemark–usually a metal plaque–on their insured buildings.

When a fire occurred, several brigades would show up. If the building wasn’t insured by a particular company, the corresponding brigade would leave the building to burn. As you can imagine, this practice was not always good for the neighborhood.

During the 18th century, pump engines were invented, allowing fire fighters to extinguish fires using hand powered pumps that released a steady stream of water. In 1833, ten insurance companies banded together to form the London Fire Engine Establishment (LFEE). Led by James Braidwood, an Edinburgh firefighter, the LFEE brought uniformity and efficiency to the fire brigades. The LFEE’s first major fire was the one which destroyed the Houses of Parliament in 1834.  There’s a beautiful painting by J.M.W. Turner of the fire on display at the Cleveland Museum of Art.

Braidwood was killed fighting the second worst fire in London’s history, the Tooley Street Fire, in 1861, which began in a warehouse. As a result of that fire, regulations were put in place to make warehouses safer, and the Metropolitan Fire Brigade (MFB), the nation’s first civic fire brigade was formed. The MFB was the model for the fire fighting services we have today. They instituted steam fire engines which could pump 300 gallons of water per minute, used horses to pull the engines, and housed them at the fire station. There are some fabulous photos at the website of the London Fire Brigade.

Dalmatians, by the way, are forever associated with fire engines because they served as guards and companions for the horses which originally pulled the engines. 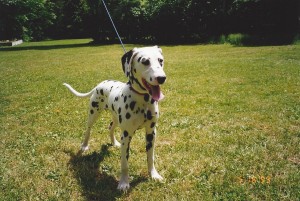 I have a soft spot for Dals. This handsome devil is George, who was our companion for twelve years until he died in 2011. He never ran alongside a fire engine, but in his younger days he did help my husband’s cross country team train–George had incredible stamina, and it was easy to see why the breed was prized as carriage dogs for centuries.

PS. Happy birthday to my sister. I wonder if she ever reads these posts?