I am very pleased to welcome author Marlow Kelly, whose most recent historical romance, A Woman of Love, was released by The Wild Rose Press on March 4. 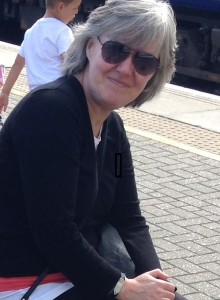 Thanks for visiting today, Marlow!

Hi, my name’s Marlow. I grew up in England and moved to Canada in my late twenties. As much as I love my adopted homeland, I do enjoy returning to London and soaking up the history.

I live in Northern Alberta, Canada – Think Ice Road Truckers. It’s cold in the winter and glorious in the summer. I love it.

I didn’t start writing until about seven years ago. I’d always had characters dancing in my head, telling stories. One day I woke up and realized if I didn’t write my stories down they might never be told.

What inspired you to write A Woman of Love?

It was two things. I read that the Victorians were a lot more liberated behind closed doors than they appeared on the surface, and then I read about wife selling. The terms of wife selling varied, sometimes it was used as a way to obtain a divorce and bring an end to an unhappy marriage, but occasionally, as in my book, it was used to pay a debt.

That got me thinking what if…

These days a woman can leave her husband, but in the Victorian Era women were owned, by their husbands. She was at his mercy. From there, the idea grew.

At this point I have to say it’s a mess. The Honour, Love and Courage books are a series of novellas. I just held the stories in my head until I’d written them down. I can’t do that with a full-length novel. There are too many plot twists and details to recall. But if I plot the story too deeply then I’ve already told it and I don’t want to write it down. If I don’t plot at all then the story falls apart, normally somewhere in the middle. I’m trying to figure out an approach that’s right for me; I’m more of a work in progress than my stories.

I spend time with my family, read, watch TV, and walk – I get my best ideas when I walk. I also love to travel. My mother says I should have been born a gypsy. I didn’t settle down until I was in my mid-thirties because I was too busy roving; luckily I married a man who likes to travel as much as I do.

I’m working on a full-length novel that follows A Woman of Honour. It’s called An Unacceptable Woman and is the story of Isabel’s brother, John, and a young street entertainer, Ellie. I’m also plotting a murder mystery romance to follow A Woman of Love.

I can walk on stilts. Actually, I’ve been married for twenty years and until recently even my husband didn’t know I had this skill. It’s just not something that comes up in everyday conversation. I mean how would that sound?

“Hi honey, do you want a cup of coffee and by the way, I can walk on stilts.”

Okay, I have to admit the stilts I walk on aren’t very tall – about three feet high– but they’re still stilts, so I count it.

My father made us stilts to play with when I was a child. I really hadn’t thought about it for a long time, and then last summer we were at a street performers festival. The organizers had a large tent set up where spectators could try stilt walking. I looked at them and thought – I can do that. I climbed on and started to walk. It was as if I was ten years old again playing in my backyard.

Read your work aloud before you let anyone else read it. I cannot emphasize this enough. You would be amazed at the mistakes your mind can overlook. If you don’t want to sound like a winged-nut sitting at the computer talking to yourself, then I suggest you get a program like Natural Reader.  You can plug in some headphones and listen as the computer reads your work. I find it invaluable.

Stilts, wow. 🙂  Thank you so much for joining me today, Marlow. A Woman of Love sounds wonderful and I can’t wait to read it. Best of luck with it! 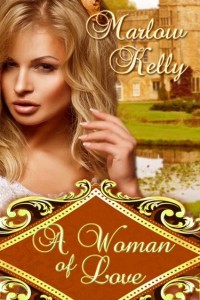 A Woman of Love, by Marlow Kelly

When her dissolute husband insists that Lady Annabel Peters bed one of his villainous cohorts to repay a gambling debt, she is scandalized. But she is forced to agree because he controls every aspect of her life.

A physically and emotionally crippled war hero, James Drake has retreated from society. At the request of his brother, he manipulates events so he can interrogate Annabel, a woman he thinks may be part of a ring of thieves.

Neither of them count on an instant and overwhelming attraction. James may now believe Annabel but she suspects her husband plans to kill her. As one of her husband’s friends, James is not to be trusted.

Yet how can she escape a man who has the ability to control her with a gentle kiss?

Lady Annabel Peters sat in the open-top carriage and realized she had left it too late. She should have escaped yesterday.

“Really, Annabel, I don’t want you to give your left eye. All I’m asking is that you go in there and do what comes naturally.” Lord Elliott Peters, her husband of two months, sat opposite her, smoothing his waistcoat against his flat, toned abdomen. A lock of blond hair fell across his brow, accentuating his startling blue eyes. He claimed all he had to do was crook his finger, and besotted society women swooned, but she couldn’t imagine it. His grotesque personality obliterated any physical beauty he possessed.

The warm summer breeze touched her face. She inhaled the scent of grass and honeysuckle. Frogs sang somewhere in the distance, and crickets chirped, a sure sign it was going to be a warm night. She looked out at the passing Berkshire countryside, and wondered how anything this ugly could happen on such a perfect summer evening.

“It is not natural for a married woman to bed a man who is not her husband.” She struggled to breathe; a vise tightened around her chest.

“You must be joking. Women do it all the time. That’s how they entertain themselves. You didn’t believe we would be faithful to each other for the rest of our lives, did you? What a ridiculous notion.”

The thought of copulating with Elliott was horrific enough. Now he wanted her to sleep with his friends, too. Bile rose in her throat at the idea of having to endure another man like her husband. He was totally amoral, and thought nothing of sleeping with a friend’s wife. He undoubtedly took pleasure in it. He never controlled his lust. If he saw a woman he wanted, he took her by any means possible.

You can find A Woman of Love at:
Amazon
The Wild Rose Press
B&N
iBooks

And finally, a giveaway!  Marlow is giving away a $10 Amazon gift card. Visit www.marlowkelly.com to get Marlow’s blog tour dates in March and follow the tour. The more you comment, tweet, and follow, the more chances you have to win.