I live in a rural area in Southwest Missouri. How rural? This morning, my alarm was the sound of cattle, bawling about something in the pasture next to my house. Actually, it sounded as if they were outside my window. It was almost 6:30 a.m. On a Saturday.

My fiction writing started about seven years ago although, like most of us, I’ve been writing off and on for years, but never fiction for publication. I did spend several years as a newspaper reporter and editor, but it wasn’t until I took early retirement from teaching that I decided to write romance.

Sounds quite pastoral. 🙂 What inspired you to write Silverhawk? (I love that cover, by the way!)

This book, SILVERHAWK, is actually the second I wrote. The first is hiding out under the bed. 🙂 That one was a medieval and I wanted to do another one. The idea for Sir Giles came to me as I thought about how lonely a life a mercenary knight must have, although mercenaries had a bad reputation overall. What about a knight for hire who wasn’t cruel, who lived by a code of honor and loyalty—but who was driven by a need for his own personal revenge.

I say I’m a pantser, but I’m somewhere in between, actually. I know the story’s outline, I know how it ends, I know major points along the way. But how the story gets from point to point is fluid. The idea of formal plotting gives me anxiety attacks. 🙂 Seriously, though, in college when we were asked to do detailed outlines of our plots, by the time I’d finished one, I felt like I’d already written the story and I’d lose interest in it. So now writing books, I try to walk a line of some general plotting, but not so much it seems I’m writing it twice.

I actually went back to teaching a year after that early retirement. I’m an adjunct (part time) English instructor at a local college.

Right now I’m wrapping up a novella featuring two characters from this book and my second published book, THE HEART OF THE PHOENIX. The novella has a working title of Lady of the Forest and is the story of how Lord Henry and Lady Katherine meet.

Right now, I have just the one. Although it did fairly well, finaling in and winning a few contests, it needs major work toward the end. It’s the story of Sir Roark and Lady Alyss (Henry and Evie’s sister).

Oh, yes. Driving is mine. Somehow the whole plotline stretches clearly when I’m on the road. Like you, I can’t write it down. I did try a voice-activated tape recorder, but that didn’t work. I can’t leave myself messages on voicemail when I’m driving.  Plus, I feel odd talking out loud when I’m alone.

I don’t have that problem–I talk to myself all the time! Neat freak or not so much?

Oddly, the older I get, the more I want neatness.  I have a great capacity for focusing on what I’m doing, so I can ignore a lot!  But it takes less and less for me to say, ‘That’s enough. Gotta clean.’

Thanks so much for having me here today, Marin. I’ve loved visiting with you and your friends. 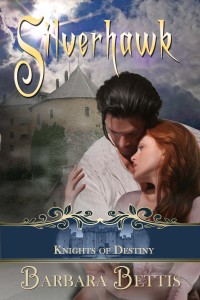 Here’s a look at Silverhawk, by Barbara Bettis:

Sir Giles has come to England to kill his father, who seduced and betrayed his mother. First, however, he’ll seek sweet revenge—kidnap the old lord’s new betrothed. But when Giles uncovers a plot against King Richard, he faces a dilemma: take the lady or track the traitors. What’s a good mercenary to do? Both, of course.

Lady Emelin has had enough. Abandoned in a convent by her brother, she finally has a chance for home and family. Yet now she’s been abducted. Her kidnapper may be the image of her dream knight, but she won’t allow him to spoil this betrothal. Her only solution: escape.

Rescuing the intrepid lady—while hunting traitors—is a challenge Giles couldn’t anticipate.  But the greatest challenge to Giles and Emelin is the fire blazing between them. For he’s everything a proper lady should never want, and she’s everything a bastard mercenary can never have.

Sir Giles found her on her knees, pulling weeds in the Lady’s Garden.

Lady Emelin sat back on her heels with an exaggerated sigh. “Would you move your shoulders, Sir Knight? They block what meager light I’ve found.”

If a tone could cross its arms and tap its toe, hers did.

A lightness inside him felt shockingly like a smile. That’s why he was here. She amused him.

“Where would you like me to move them, my lady?”

“London, I should think.”

I love that line: “A lightness inside him felt shockingly like a smile.” So vivid! Thanks for visiting, Barbara!

You can find Silverhawk on Amazon. And you can visit Barbara at: