So for the last couple of months, I’ve been querying literary agents for my new series. Although I’ve had some interest, I’ve racked up quite a few rejections. The most recent one, a kick in the teeth disguised as a pleasant form rejection, arrived Friday night. Although some writers prefer personalized rejections, I actually prefer the form ones. With them, you can preserve the illusion that they liked the book but it just isn’t right for them, instead of knowing for a fact that they hated it. I haven’t thrown in the towel yet, but I admit my enthusiasm for completing the second and third books in the series is waning the longer the process goes on. It’ll come back, I’m sure, but for now, I’m going to focus on other things to get the creative juices flowing again. 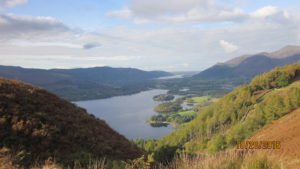 Ever since I was in England last fall, a new series has been percolating in my brain. It’s not a romance, although it will have romantic elements. It’s a cozy mystery set near Keswick in the northern Lake District, right about here:

When you write historicals, one of the most important decisions you make is deciding the time period. Victorian era is a given, but it did last a very long time. I like the middle of the era–1860s/70s. It still has vestiges of the Regency, when people dressed for dinner and wore elaborate gowns, but it’s also hurtling toward the 20th century. Railways are popping up–trains arrived in Keswick in 1865–and society is changing. 1869 saw the opening of the first residential women’s college in England, in 1870 married women gained the right to own property and elementary education was established, in 1871 trade unions were legalized.

I decided to set my series in 1870. The lakes are a popular tourist destination, and the new railway makes it easier to get there. Endless opportunities for new characters, which is essential for a cozy. I’ve uncovered maps and contemporary guidebooks (you may recall Mr. Black from my recent post about Skye, who also wrote a “Picturesque Guide” to the English Lakes in 1870) to get a feel for the area during the time period.

The next step, at least for me, is characters. I usually start with either a look, a name, or an occupation. My new heroine is Cassandra, and she closely resembles actress Emily Blunt. She’s a longtime widow with a teenage son, and runs a farm and a tea shop at the foot of Walla Crag. (It’s inspired by an actual place that offered salvation–in the form of tea, cake, and a bathroom, not necessarily in that order–after a long day of hiking. Should you ever be in the vicinity, do stop in!)

Anyway, her love interest is the local constable whose name I have yet to determine–feel free to offer suggestions–but he looks a bit like David Boreanz. Cassandra’s childhood friend, he’s back in Keswick after a stint as a policeman in Manchester, nursing the broken heart caused by the recent death of his wife.

Cozies have a reasonably large supporting cast of characters, so I am working on those. I also have the resident pet AND the dead body lined up, but you’ll have to wait for the book to meet them. 🙂

I’m going to get to work–I have quite a few characters to develop, after all, not to mention the plot–so I will leave you with a few questions I’m curious about:

Writers, how do you start a new book (or series of books)? Do you start with setting and move from there, or with characters? Or do you focus on plot first? How do you decide when and where to set your books?

Readers, do you like small town settings or cities? What kinds of characters do you like to see? Do you picture them in your head as you read, as I do when I write them, or is their appearance unimportant to you?