My debut novel, Stirring Up the Viscount, officially releases today from The Wild Rose Press.

I am alternately excited and terrified.

It’s a funny thing, a book birthday. Not unlike sending your kid to school for the first time. Is she wearing the right clothes? Will the other kids like him? Will she say something stupid or mean and get expelled on her first day? (Yes, this is where my mind goes.)

In the end, all you can do as a parent, of child or book, is to wave goodbye and hope that you did a good job getting him ready to face the world. 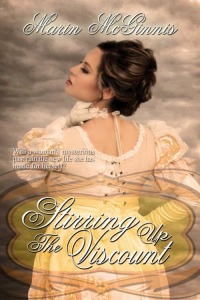 Seeking to escape an abusive husband, Theodora Ravensdale answers an ad in The Times for a job as cook in a country home. A fortuitous house fire enables her to fake her own death and flee to northern England and live under an assumed name. But Theodora’s refuge is not all she would wish, when she stirs emotions in the heir to the estate, Jonathan Tenwick, and in herself.

Meanwhile, as the connection between Theodora and Jonathan grows, her husband learns she did not perish in the fire, and searches for her. Fearing he is close to finding her, Theodora must flee again to protect the family and the viscount for whom she cares deeply. In the final confrontation with her husband, Theodora learns she is stronger than she ever knew, and love is worth fighting for.​

Available today from The Wild Rose Press and on Amazon.

I am also giving away an autographed paperback copy of the book: a limited, first edition with a typo on the cover! (Or you can have one without the typo, if you prefer.)