A few years ago, when the kid was smaller and far less lippy, he was obsessed with a series of children’s books. Wonderful books, with interesting story lines and well drawn characters, and there were at least fifty of them at the time. One Christmas, we got a few of them on tape and listened as we drove across the country to the grandparents’ house. Nearly every line of dialogue was followed  by a ‘said.’ When you read these books to yourself, you don’t notice them. But when they are read aloud, wow. It became a game as we all shouted ‘said!’ every 30 seconds as the book progressed. 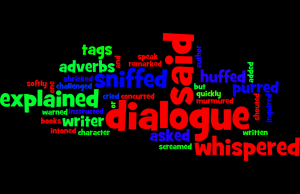 I was thinking of this today as I judged a contest entry. After nearly every line of dialogue, there was a dialogue tag–those words used to convey information about the speaker. But because this author had probably heard somewhere that using ‘said’ is boring, she used other words too, including: remarked, explained, asked, instructed, huffed, purred, challenged, inquired, sniffed, whispered, concurred, warned, murmured, intoned, and added. And all of those were in the first few pages. An occasional asked, explained, or whispered is fine, but one doesn’t speak and sniff at the same time–go ahead, try it. In addition, many of the tags were peppered with adverbs–softly whispered, quickly explained. I should add that this entry was otherwise quite well written, but the ridiculous dialogue tags and excessive adverbs may have ruined the author’s chance to final in the category.

So, how to fix this problem? I am not saying a writer should never use dialogue tags. They are essential to clarify who is speaking, especially if there are more than two people in a scene. But you don’t need them all the time. Try a line of dialogue followed, or preceded, by a character’s action or expression. For example:

“You must be joking.” Robert laughed at the thought.
Evelyn sneered. “You’ll see.”

When you do use a dialogue tag, keep it simple. As I noted above, I hadn’t realized the children’s book author used ‘said’ so often, because when I read her stories, ‘said’ faded into the background. It conveys the identity of the speaker without beating the reader over the head. If you want to show a speaker’s emotion, or expression, try it another way:

His smile faded. “I’m sorry.”
“I don’t care, my lord.” She shrugged and turned away.

Pick up a book by your favorite author. How do they use dialogue tags? You may be surprised when you look more closely. The following exchange is from Julia’s Quinn’s On the Way to the Wedding. The characters are discussing what it must feel like to know you’re in love:

She lifted her eyes to his, made breathless by the gravity of of her own revelations.”It’s too much,” she heard herself say. “It would be too much. I wouldn’t. . . I wouldn’t. . .”
Slowly, he shook his head. “You would have no choice. It would be beyond your control. It just . . . happens.”
Her mouth parted with surprise. “That’s what she said.”
“Who?”
And when she answered, her voice was strangely detached, as if the words were being drawn straight from her memory. “Hermione,” she said. “That’s what Hermione said about Mr. Edmonds.”
Gregory’s lips tightened at the corners. “Did she?”
Lucy slowly nodded. “Almost precisely. She said it just happens. In an instant.”

There are plenty of other posts out there that go into more detail, and even a few books. Some of the better blog posts are these:
http://www.writing-world.com/grammar/said.shtml
http://www.quickanddirtytips.com/education/grammar/how-to-eliminate-adverbs
http://www.writersdigest.com/editor-blogs/there-are-no-rules/keep-it-simple-keys-to-realistic-dialogue-part-ii
http://querytracker.blogspot.com/2012/06/using-dialogue-tags-and-punctuation.html
http://theeditorsblog.net/2013/12/04/another-take-on-dialogue-tags/

How do you feel about dialogue tags, as a reader or a writer?