Happy Sunday, everyone! I’m back, finally, with a historical post.

The book I’m working on now is more mystery than romance–my penchant for killing people off in my books suggested I ought to go in the mystery direction, although so far I’ve killed off fewer people in this book than in all the others. Go figure.

Arsenic makes an appearance in the book, largely because it was hands down the most prevalent poison in the Victorian era. Believe it or not, many of the deaths from arsenic poisoning were actually unintentional. Arsenic was a component of many commonly used products, including cosmetics and soaps, fabric, and wall paper. 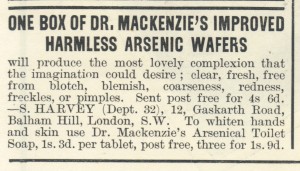 Arsenic cleared the complexion of blemishes and produced the pale skin popular at the time. (Of course, they used lead too, which is another issue entirely.)

Arsenic was also the main component of lovely green pigments and other colors that adorned Victorian walls–wallpaper was very trendy (between 1834 and 1874, the number of wallpaper rolls produced in Britain rose by 2,615%), and the same colors were used on toys, clothing, even artificial flowers women wore in their hair.
Although doctors began sounding the alarm of the dangers of arsenic exposure in these materials in the early 1850s, they were dismissed as hysterical. It wasn’t until the demands of the market changed in the 1870s (and after Queen Victoria had all the green wallpaper removed from Buckingham Palace in 1879) that British manufacturers began to change their practices. It has even been hypothesized that Napoleon was murdered by wallpaper.

There was plenty of deliberate arsenic poisoning in the Victorian era as well. In 1851, Parliament passed the Sale of Arsenic Regulation Act, which required those who sold arsenic to maintain a written and signed record of sales (as we do in the U.S. now with pseudoephedrine), and it demanded that no one could sell arsenic to someone unless they knew the purchaser. It also required arsenic, with some exceptions, to be colored with soot or indigo before sale.

When I first started researching this, I discovered the 1851 act as originally written only restricted children from purchasing arsenic, but I also found several articles which noted an amendment to the law, added at the last minute, restricted women as well.  Unfortunately, I can’t find any proof of this, which is making it somewhat more challenging to write the book. I may actually have to darken the doors of my law school library. Update: Some days I’m unable to stop researching, so I found this snippet about the provision barring sales to women, which in the end was NOT included in the final legislation: “…sales would be restricted to those of full age though not, as Carlisle, the PMSA, and the Pharmaceutical Society would have preferred, to men only, the decision to discriminate against women being dropped ‘owing to the indignant remonstrances of ladies’.” Thank goodness for indignant remonstrances of ladies. 🙂  And now excuse me as I head off to rewrite three or four chapters…

Arsenic poisoning was so prevalent that it was one of the first compounds for which a toxicology test was created. Although a test to detect the presence of arsenic had been developed in 1775, in 1832, British Chemist James Marsh was asked to analyze a cup of coffee that had allegedly been used to poison a man. Marsh did so, but by the time of trial, the substance had deteriorated. The man, John Bodle, was acquitted. When Bodle later admitted he had actually committed the crime, Marsh was determined to develop a more stable test that could be successfully used in court. By 1836, he had done so, and the Marsh test was first used in France to convict Madame Marie LaFarge of killing her husband.

And now, just for fun, I will leave you with this clip from Arsenic and Old Lace.