It is February, that shortest of months which, at least here in NE Ohio, seems the longest. Winter is in full swing, with nary an end in sight. The snow is piled high and the skies are gray with more to come.

It is perhaps lucky, then, that we have an opportunity to break up the February blahs with Valentine’s Day. Valentine’s Day is not a Victorian creation, by any means–it has its origins in Roman times. Some say it is rooted in the festival of Lupercalia, a fertility celebration.

There are several legends about how it became associated with St. Valentine. Most agree that St. Valentine was a bishop who lived during the reign of Emperor Claudius. Claudius believed that married men made poor soldiers–conflicted, apparently, by the duties of family and of war–so he decreed that soldiers in the Roman Army could not marry. Bishop Valentine thought this was wrong, so he made a practice of marrying soldiers to their lady loves in secret. Claudius found out, of course, and threw Valentine in jail. Valentine was executed by the Emperor for his failure to obey the edict regarding marriage, as well as for failing to renounce his Christian faith. He died, it is said, on February 14, AD 270.

Valentine’s Day cards aren’t new either. People have been sending written notes to lovers since Roman times, and the practice was prevalent during the Middle Ages. Before mass-produced Valentines became commonplace during the Victorian period, lovers had to write their own messages, which they they decorated with lace, ribbons, and drawings. For those lacking a natural affinity for poetry, there were pamphlets known as “Valentine Writers” to help them out. 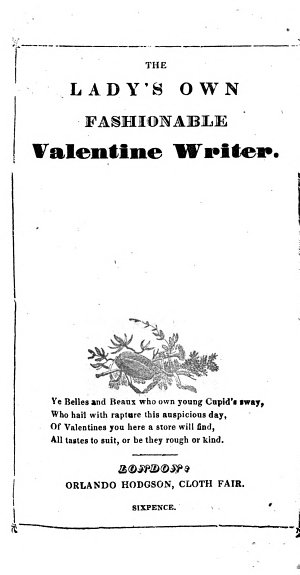 Do a search on Google Books to find some of these gems. One of them, The Lady’s Own Fashionable Valentine Writer, is of indeterminate age. It offers verses based on nationality as well as name, both requesting to be a Valentine and making it clear that a gentleman’s attentions are not welcome. You have to read them–they are fabulous.

Some of my favorites:

To a Frenchman:
Forbear, you ape! your monkey tricks will not suit,
Really you are a most disgusting brute;
Either you must be mad or else a fool,
Not to perceive your lucky star don’t rule,
Can you believe that snuff and sheer grimace,
Have charms to counteract your ugly face;
Morbleu! a woman must be hardly set,
And quite despair a Valentine to get,
Not to reject with scorn your gallic net.

From a young lady to her lover:
Dear youth, to thee I dedicate my hours,
And crown thy bust with amaranthine flow’rs;
The hyacinth so sweet, the violet blue,
And fragrant roses wash’d with morning dew,
Rich scented pinks, jonquils, eglantine,
Enwreath’d by Cupid for my Valentine;
These speak affection that is wholly thine,
And lead me willing onto Hymen’s shrine.

To Nathaniel:
Noodle desist! don’t think me such a slave,
A rare opinion of me you must have,
To think with such a stupid sot I’d wed,
Heavens, t’were better far that I were dead,
All that you do and say so smells of folly,
None could be pleased unless a drunken dolly;
If but in thought I could be so supine,
Ever to take you for a Valentine,
Let want and wretchedness always be mine.

To Patrick:
Pray, tell me now, what is it you’d be after?
A merry soul, you make one die of laughter;
Truly you are a very comic nation,
Renown’d for bulls whene’er you make oration;
In love and war, both equally you shine,
Could I but trust you I would fain be thine,
Keep up your spirits–you’re my Valentine.

To Anthony:
Allowed by all you are a precious fool,
Not fit as yet to be let loose from school;
Truce with your stuff, no longer press,
Have you the vanity to hope success?
One hardly can believe you are serious;
Nothing on earth was ever so mysterious,
You, my Valentine!–‘twould make me delirious.

I could do this all day.

The “Mother of the American Valentine” was Esther Howland, a 19-year old girl from Worcester, Massachusetts. She received her first Valentine from England in the 1840s. She liked it, but thought she could do better. She and her friends made several samples, and asked her brother, who worked for her father’s stationery business, to show them around on his next sales trip to see if anyone was interested in ordering them. He returned from that trip with orders worth $5000. The New England Valentine Company grew from that order to a lucrative business that at one time was the largest greeting card company in the world.

Miss Howland sold the business in 1881. She never married, which makes me a bit sad. Regardless, her mark on the holiday is a forever lasting one.

Happy Valentine’s Day to you and yours!