Apologies for my absence of late. June was crazy busy, and last week I was away for my anniversary–more on that in a future post!

My guest today is the very talented and prolific Nina Croft. Her latest book, The Spaniard’s Kiss, released this week. Welcome, Nina! 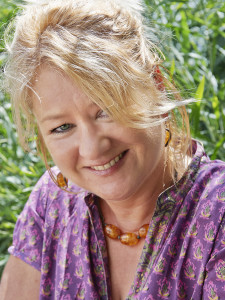 My name is Nina Croft. I’m English but I live in southern Spain, in a beautiful area which lies between the Sierra Nevada Mountains and the Mediterranean Sea.

I first started writing a long time ago, when I was working as a volunteer in a remote village in Zambia on the banks of Lake Kariba. This was long before Kindles, and I ran out of books to read with alarming frequency (I had a book-a-day habit to feed!)  A tragedy of gargantuan proportions. My only recourse was to write my own and so I began. When I left Africa, I put writing aside for a while until I moved to Spain around ten years ago, when I started to seriously learn the craft, how to plot, write, edit. Now I’m totally hooked.

Wow! A tragedy indeed, but I’ll bet that was an amazing experience. What inspired you to write The Spaniard’s Kiss?

The opening scenes of my latest release, The Spaniard’s Kiss, take place in Spain, close to where I now live. It’s a remote area, far from any shops, and where the local shepherd still takes his goats out every day and the vineyards are ploughed by mules.  Some people love it, some people hate it. The reasons behind that fascinate me, and so I started The Spaniard’s Kiss. Rafe, the hero, has a grandfather who was a shepherd here, and he hates the place!

I’m a total plotter, though I don’t stick to one method. I’ve tried both pantsing and plotting and everything in between but found that I’m happiest plotting out before I start writing, usually down to scene level. Two main reasons—the first is it gives me time to get to know my characters before I write. The other is that I like writing fast first drafts as I think the writing flows more naturally. I can only do that if I don’t have to keep stopping and deciding what happens next. It also means I can concentrate on character motivations and reactions to events while I’m writing, rather than on what those events actually are.

You have far more discipline than I do! What do you do when you’re not writing?

I don’t quite have a book-a-day habit anymore because I spend so much time writing, but I do still read a lot. Other things are: Horse riding, I have a beautiful mare called Gencianna. Walking, I have three dogs. Pig-grooming, I have a three-legged Vietnamese potbellied house pig. As you can see my spare time is pretty animal-orientated. Also this time of year, I swim and go to the beach when I can—I love the sea.

Sounds very bucolic. 🙂 What are you working on now?

I’m currently working on the first draft of a book for Entangled Publishing’s Brazen line—hot contemporary romance. It’s called, Her Fantasy Husband, and it’s book 2 in a new series, Things To Do Before You Die. I’m also working on edits for the first book, His Fantasy Girl, which releases this October.

Sadly, the book I wrote while working as a volunteer in Zambia, The Best of Intentions, will never see the light of day, but it was my first. Neither will my second or third…

I talk through plot problems with my mare, Gencianna, while I’m out riding, though strangely she never seems to offer advice in return. I can sometimes get so engrossed that I suddenly realize where I am, and it’s not where I intended to be.

Probably much safer to do that on a horse than in a car, which is what occasionally happens to me. Can we see a photo of your writing space?

This is my writing nook, where I write first drafts on my laptop (when I can nudge Grunt out of the way.) 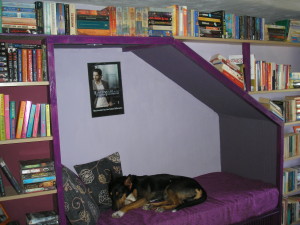 Aww. Grunt is adorable! Neat freak or not so much?

I knew there was a reason we get along. Other than “butt in chair,” what piece of advice would you give to an aspiring author?

Write what you love—it’s the only thing that will keep you going when things get tough. Which they will.

Very good advice! Thanks so much for stopping by, Nina! Here’s more about Nina’s latest release: 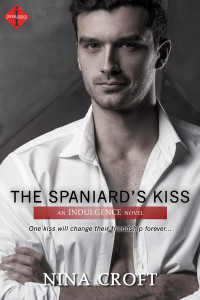 s will change their friendship forever…

Widow Isobel Sinclair knows it’s time to move on, and she believes the next chapter in her life involves a baby. All she needs is a man to help her with the finer details. Unfortunately, right now the only man in her life is her husband’s best friend, Rafael Sanchez. And an incredibly wealthy, super-hot player is not exactly family material.

That’s okay since she wants a baby sans the husband part.

Billionaire playboy Rafael has carefully hidden his longing for Isobel over the years. He’s wanted her from the moment they met. When desire sparks between them, Rafael faces a choice beyond imagining: give Isobel what she wants…or lose her forever. He has a good reason why a child can’t be in his future, but telling Isobel the truth could destroy everything.

A dull ache throbbed behind his eyes, no doubt caused by lack of sleep and exacerbated by the onset of insanity. That was all it could be—Isobel Sinclair was driving him mad. It was two days since she’d made her preposterous proposition, and he hadn’t felt entirely sane since.

Every time he turned around she was there—talking to some man. He hadn’t realized there were so many men about, tall ones, short ones, fat ones, thin ones. Their appearance didn’t seem to matter to Bella. Perhaps he should give her a little lesson in genetics, point out that she should be a bit more discerning if she was looking for someone to father her children.