So I expected to write a happy post today about my brilliant success at NaNoWriMo, but as with so many things in life, my expectations far outstripped my capabilities. This November, I’ve had a blog tour for a book release (hurray!), a new job (hurray!), and a nasty bacterial infection that has sapped my strength, made my eyelid swell up so much I could barely see, and generally hampered my ability to keep up with my 1,667 daily word goal (boo!).  I am now so far behind that unless I write about 2,700 words per day, I can’t catch up. I almost never say never, but that’s probably not happening.

So instead of dwelling on that, I thought I’d do a grumpy grammar post. This month’s topic: Prepositions.

What are prepositions, you ask? They are connector words that show the relationship between two other words in a sentence. (I love the graphic at right, which comes from Grammar-Monster.com–think of a preposition as anywhere a mouse could go.) For example:
My mother lives in Boston.
The Halloween candy was divided between the two boys.
The dog ran behind the house.
The mouse lives under the stove.

Some common prepositions are above, about, across, against, along, among, around, at, before, behind, below, beneath, beside, between, beyond, by, despite, down, during, except, for, from, in, inside, into, like, near, of, off, on, since, to, toward, through, under, until, up, upon, with, within. All prepositions are accompanied by a noun or pronoun which is called the object of the preposition. In the above examples, Boston, boys, house, and stove are the objects.  Usually, although not always, the object follows the preposition. 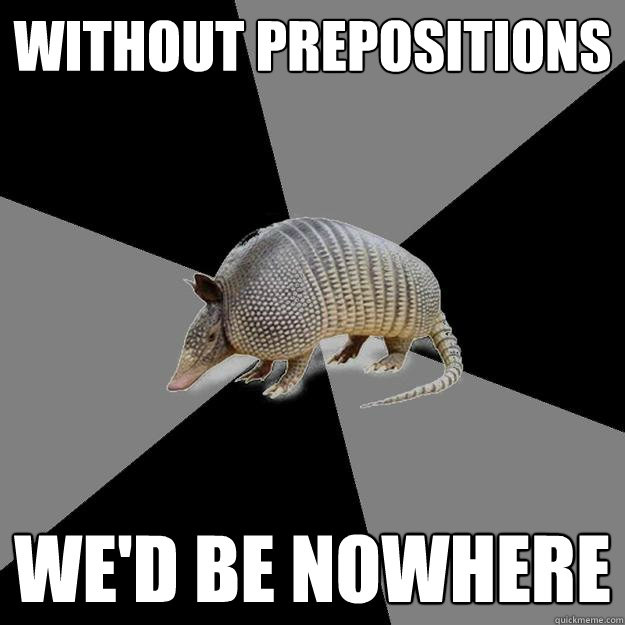 Easy enough, right? Hmm. I had a college professor who was adamant (adamant!!) that you may not end a sentence with a preposition. Ever. So while it’s not a hard and fast rule–and some regional dialects actually do it often (“Where you at?” “Want to come with?”)–I have been conditioned to avoid it. I am so good at avoiding it, in fact, I had a really hard time coming up with examples.

If you can’t rewrite the sentence, and moving the preposition away from the end makes the sentence sound ridiculous, leave it as is. For example, That’s behavior I won’t put up with sounds far better than That’s behavior up with I will not put, even though the latter is technically correct. Just imagine your 9th grade English teacher yelling either sentence at your class, and you’ll understand what I mean. Or consider saying At what are you looking? instead of What are you looking at? Um, no.  You’d sound absurd.

Sometimes prepositions aren’t necessary, and your writing is stronger without them. For example:
The dance will end at about eleven.  You can omit either the at or the about, depending on what you mean to say; you don’t need both. 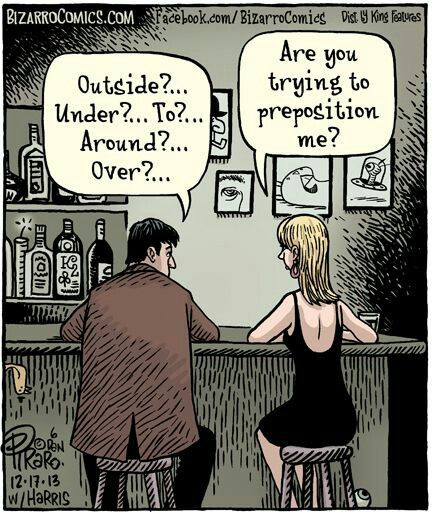 Our house is near to the street.  The to is unnecessary.

These are examples of compound prepositions, which are made of two or three prepositions. Although the examples above show unnecessary prepositions, these are more important:
I sat in between my two friends. (I would argue that you don’t need the in, but maybe that’s just me.)
The cat ran in front of my car.

So how do you feel about ending a sentence with a preposition? You in? 🙂