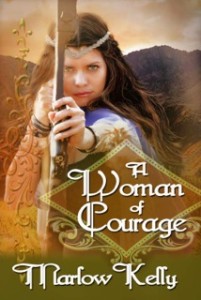 A Woman of Courage
by Marlow Kelly

When an injured Fianna Byrne turns up at Connell O’Neill’s gate twelve years after their separation he knows this could be his last chance to find happiness with the woman he loves.

False accusations against Fianna had strained relations between their clans and forced Connell, under Irish law, to divorce her. Their disastrous three-month relationship left Fianna pregnant and heartbroken. She has avoided Duncarraig and her ex-husband ever since.

But with her home obliterated by the Vikings, Fianna must face her past in order to save her son, and prove once and for all she is a woman of courage.

Connell held Fianna’s hand as he led her inside. Was this really happening or was it a dream? He had to turn around and check. He had imagined this moment for the last twelve years. His attraction to her was more than physical. He enjoyed her fire, and her spirit. She lived by her own moral code and did not bend to the will of others without reason. These were the characteristics his father had abhorred, but then, Seamus had enjoyed weak women. Pretty, mindless things he could hang on his arm.

Had his father been threatened by Fianna’s strength? After she was gone, Connell had come to realize her depth of character made her special. She had been his confidante, lover, and friend. Her intelligence did not overwhelm his intellect, as his father had suggested, but enhanced it. For those brief months he enjoyed her counsel, and had missed it every day since.

He glanced at her again. Even with everything that had happened this night she had the bearing of a queen, an indomitable woman who could never be conquered.

You can find A Woman of Courage at these retailers:
The Wild Rose Press
Amazon
Nook
ARE 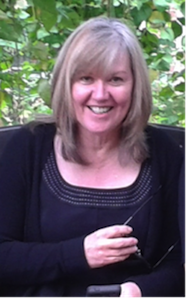 After being thrown out of England for refusing to drink tea, Marlow Kelly made her way to Canada where she found love, a home and a pug named Max. She also discovered her love of storytelling. Encouraged by her husband, children and let’s not forget Max, she started putting her ideas to paper. Her need to write about strong women in crisis drives her stories and her curiosity regarding the lives and loves of historical figures are the inspiration for her characters. You can visit Marlow at www.marlowkelly.com

And for more about Marlow, check out the author interview I posted earlier this year.