Hop over to Lori’s blog today to learn about some of her favorite things at Christmas time, including Christmas music, handmade gifts (including cat-butt coasters), and giving to charity. 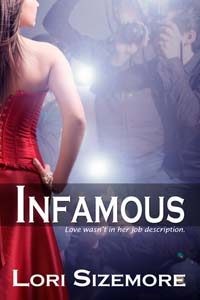 Here’s a bit more about Lori’s new book and Lori herself:

Justine Montgomery, daughter of a divorced beauty queen and TV magnate, is a tabloid disaster after her infamous sex tape. She’s so desperate to help save her family’s home she turns to her deal-making dad. Can she prove to him she’s cut out for a career in television or will she lose it all?

Sawyer has his own past and a successful career is his only goal. Seeing Justine fail would mean the promotion of a lifetime, but things get complicated when he develops feelings for her. Suddenly, the lines between work, life, sex, and love are blurry.

They will have to overcome the bitterness of a rejected ex, the controlling actions of her father, and the half-truths they’re telling one another to forge a lasting partnership both on the job and off the clock.

You can find Infamous at these retailers: Amazon | Barnes & Noble | iBooks | Kobo | All Romance | BookStrand | Goodreads

Lori Sizemore grew up in the mountains of West Virginia and never quite managed to escape them. Lori lives at home with her husband of twenty-plus years and two of her three daughters. She also lives with two dogs, a cat, and five hermit crabs. Yes, five of them. This menagerie and her family keep her busy.

She worked in mental health as a social worker for ten years before making the choice to write full-time.