This post is a reboot of one published on October 1.  The original disappeared after a website snafu, but thanks to my RSS feed on Goodreads, the sausage roll recipe is not gone forever, and I have received a helpful reminder to back up my blog posts…

As the weather turns cooler, my poodles race around like maniacs and I start to bake. Yesterday was no exception. After a week of 80-plus degree heat, the temps finally sank to a respectable 63 degrees and I went digging for my cake pans. I made sausage rolls along with mashed potatoes and onion gravy, steamed English peas, and a Victoria sandwich for dessert. Comfort food at its best. 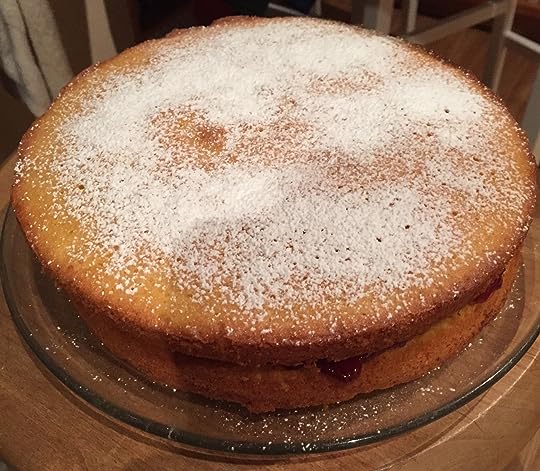 I’ve already posted about the Victoria sandwich here so today we’ll talk about the sausage roll. Although stuffing sausage in a bread-like cover has been a practice for centuries, no recipe for sausage rolls appeared prior to 1842 (at least that I can find). Since that one is reprinted in a 20-year old English cookbook I can’t get my hands on without paying overseas postage, I have no idea where the recipe came from. My beloved Mrs. Beeton, however, published a recipe for sausage rolls in her 1861 Book of Household Management, which looks very much like the recipes in use today:

MEAT OR SAUSAGE ROLLS.
1373. INGREDIENTS – 1 lb. of puff-paste No. 1206, sausage-meat No. 837, the yolk of 1 egg.
Mode.—Make 1 lb. of puff-paste by recipe No. 1206; roll it out to the thickness of about 1/2 inch, or rather less, and divide it into 8, 10, or 12 squares, according to the size the rolls are intended to be. Place some sausage-meat on one-half of each square, wet the edges of the paste, and fold it over the meat; slightly press the edges together, and trim them neatly with a knife. Brush the rolls over with the yolk of an egg, and bake them in a well-heated oven for about 1/2 hour, or longer should they be very large. The remains of cold chicken and ham, minced and seasoned, as also cold veal or beef, make very good rolls.
Time.—1/2 hour, or longer if the rolls are large.
Average cost, 1s. 6d.
Sufficient.—1 lb. of paste for 10 or 12 rolls.
Seasonable, with sausage-meat, from September to March or April.

Mrs. B’s sausage recipe is also similar to the one I used. Sausage recipes vary immensely from region to region, and Mrs. B points out this one is from Oxford: 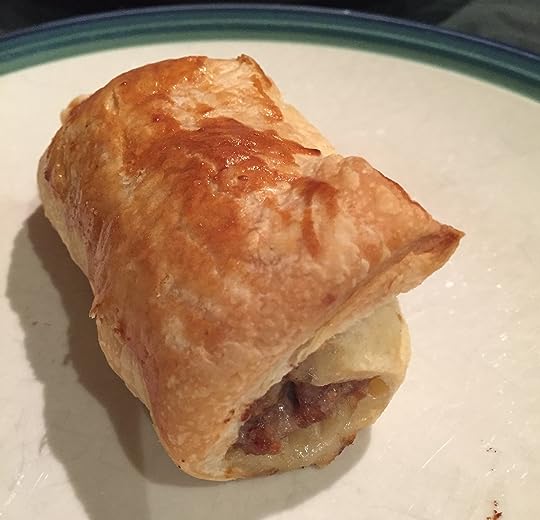 TO MAKE SAUSAGES.
(Author’s Oxford Recipe.)
837. INGREDIENTS – 1 lb. of pork, fat and lean, without skin or gristle; 1 lb. of lean veal, 1 lb. of beef suet, 1/2 lb. of bread crumbs, the rind of 1/2 lemon, 1 small nutmeg, 6 sage-leaves, 1 teaspoonful of pepper, 2 teaspoonfuls of salt, 1/2 teaspoonful of savory, 1/2 teaspoonful of marjoram.
Mode.—Chop the pork, veal, and suet finely together, add the bread crumbs, lemon-peel (which should be well minced), and a small nutmeg grated. Wash and chop the sage-leaves very finely; add these with the remaining ingredients to the sausage-meat, and when thoroughly mixed, either put the meat into skins, or, when wanted for table, form it into little cakes, which should be floured and fried.
Average cost, for this quantity, 2s. 6d.
Sufficient for about 30 moderate-sized sausages.
Seasonable from October to March.

I cheated and used frozen puff pastry (because my fall baking energy only goes so far), but if you want Mrs. B’s puff-paste recipe, there are two versions here, along with a handy tip for how to make butter in summer, should you be so inclined (and have a cow nearby):

VERY GOOD PUFF-PASTE.
1205. INGREDIENTS – To every lb. of flour allow 1 lb. of butter, and not quite 1/2 pint of water.
Mode.—Carefully weigh the flour and butter, and have the exact proportion; squeeze the butter well, to extract the water from it, and afterwards wring it in a clean cloth, that no moisture may remain. Sift the flour; see that it is perfectly dry, and proceed in the following manner to make the paste, using a very clean paste-board and rolling-pin:—Supposing the quantity to be 1 lb. of flour, work the whole into a smooth paste, with not quite 1/2 pint of water, using a knife to mix it with: the proportion of this latter ingredient must be regulated by the discretion of the cook; if too much be added, the paste, when baked, will be tough. Roll it out until it is of an equal thickness of about an inch; break 4 oz. of the butter into small pieces; place these on the paste, sift over it a little flour, fold it over, roll out again, and put another 4 oz. of butter. Repeat the rolling and buttering until the paste has been rolled out 4 times, or equal quantities of flour and butter have been used. Do not omit, every time the paste is rolled out, to dredge a little flour over that and the rolling-pin, to prevent both from sticking. Handle the paste as lightly as possible, and do not press heavily upon it with the rolling-pin. The next thing to be considered is the oven, as the baking of pastry requires particular attention. Do not put it into the oven until it is sufficiently hot to raise the paste; for the best-prepared paste, if not properly baked, will be good for nothing. Brushing the paste as often as rolled out, and the pieces of butter placed thereon, with the white of an egg, assists it to rise in leaves or flakes. As this is the great beauty of puff-paste, it is as well to try this method.
Average cost, 1s. 4d. per lb.

MEDIUM PUFF-PASTE.
1206. INGREDIENTS – To every lb. of flour allow 8 oz. of butter, 4 oz. of lard, not quite 1/2 pint of water.
Mode.—This paste may be made by the directions in the preceding recipe, only using less butter and substituting lard for a portion of it. Mix the flour to a smooth paste with not quite 1/2 pint of water; then roll it out 3 times, the first time covering the paste with butter, the second with lard, and the third with butter. Keep the rolling-pin and paste slightly dredged with flour, to prevent them from sticking, and it will be ready for use.
Average cost, 1s. per lb.
BUTTER IN HASTE.—In his “History of Food,” Soyer says that to obtain butter instantly, it is only necessary, in summer, to put new milk into a bottle, some hours after it has been taken from the cow, and shake it briskly. The clots which are thus formed should be thrown into a sieve, washed and pressed together, and they constitute the finest and most delicate butter that can possibly be made.

And should you find Mrs. Beeton entirely too much work, try this recipe from the BBC, which I tweaked a bit: 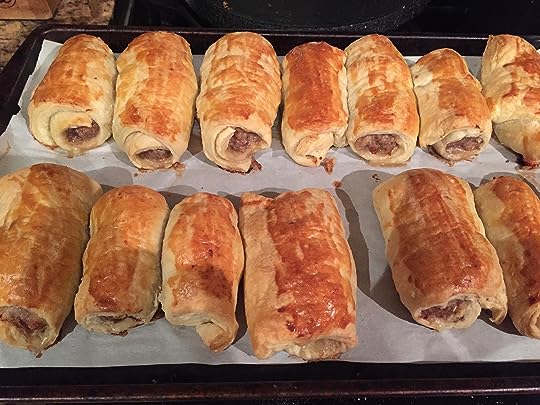 Preheat the oven to 400 and line a baking tray with parchment paper.

Combine the dried herbs, salt and pepper, pork, Worcestershire sauce, sage and thyme. Stir, then add breadcrumbs. Mix well with your hands and set aside.

Roll the pastry into a rectangle about 20 inches long and 12 inches wide (I didn’t measure, so I have no idea if this is right–just make a big rectangle). Cut in half length-wise with a knife or pizza cutter.

Roll the meat into a long, thin sausage, approximately the same length as the pastry. (Don’t make it too thick or the sausage will not cook.)

Place the sausage on the edge of one of your rectangles and roll it up in the pastry. Brush some egg wash on to seal the edge of the pastry. If you want it to look neat, trim any excess pastry from the end and discard.

Cut the sausage roll into four (relatively) equal parts, or more if you want appetizer sized rolls. Brush the top of each roll with egg wash.

Repeat with remaining sausage and pastry. You will have extra sausage meat when you’re done (if you don’t, you made your sausages too thick), so save that for breakfast patties another day, or freeze to use in more sausage rolls later.

Place the rolls on the lined baking tray. Chill for at least 30 minutes. Bake at 400 for 25-30 minutes, or until puffed and golden-brown.

The original BBC recipe, which includes homemade puff, is at http://www.bbc.co.uk/food/recipes/homemade_puff_pastry_72461.

Sausage rolls may be eaten hot or cold, although I prefer them hot, with a bit of mustard. They freeze well, but reheat them in the oven, wrapped in foil, not the microwave.

Now if you’ll excuse me, I am rather hungry. 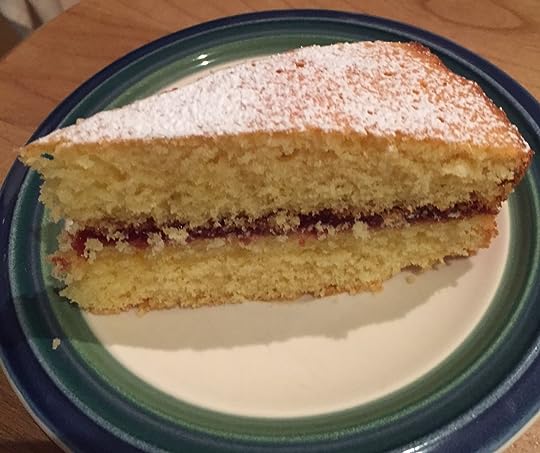 No comments have been added yet.